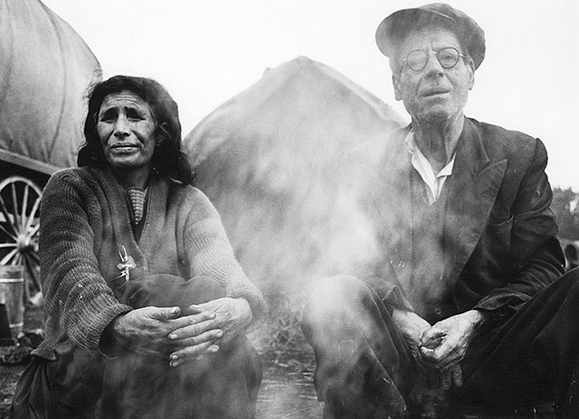 The snow falls deep; the Forest lies alone:
The boy goes hasty for his load of brakes,
Then thinks upon the fire and hurries back;
The Gipsy knocks his hands and tucks them up,
And seeks his squalid camp, half hid in snow,
Beneath the oak, which breaks away the wind,
And bushes close, with snow like hovel warm:
There stinking mutton roasts upon the coals,
And the half roasted dog squats close and rubs,
Then feels the heat too strong and goes aloof;
He watches well, but none a bit can spare,
And vainly waits the morsel thrown away:
‘Tis thus they live – a picture to the place;
A quiet, pilfering, unprotected race.

With careful step to keep his balance up
He reels on warily along the street,
Slabbering at mouth and with a staggering stoop
Mutters an angry look at all he meets.
Bumptious and vain and proud he shoulders up
And would be something if he knew but how;
To any man on earth he will not stoop
But cracks of work, of horses and of plough.
Proud of the foolish talk, the ale he quaffs,
He never heeds the insult loud that laughs:
With rosy maid he tries to joke and play,–
Who shrugs and nettles deep his pomp and pride.
And calls him ‘drunken beast’ and runs away–
King to himself and fool to all beside.

family in Northamptonshire, he spent most of his life as

Except for one excursion to London, where briefly he

was flavour-of-the-season – “The Peasant Poet” –

to his county, covering many miles on foot, even

wandering “back home”  from Northborough Asylum

where he would spend the last twenty years of his life.

A  bell-rope  length  of  several  colours  made.

The  patient  few  observe  him  after  dark

About  his  life  are  strange  opinions  many.

The  Great-Lakes  Dragonflies  at  duty  play.

They  reproduce  their  kind,  to  grasses  cling. 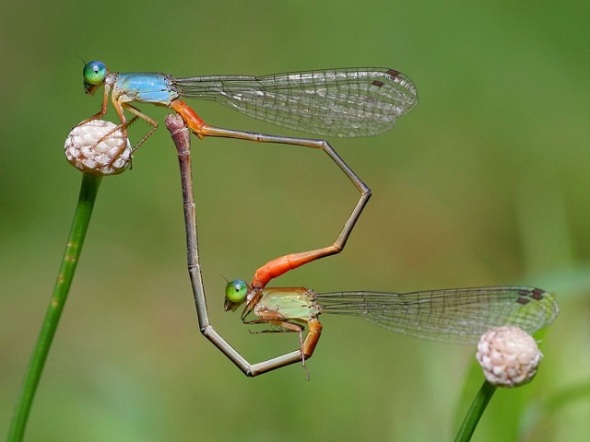 Is  slow  to  answer  mother  overwrought

Discov’ry  of  his  stealth’s  a  stunning  sting,

For  several  frozen  months  their  voice  is  silent

In  winter’s  final  days  they  start  their  talking

And  by  their  dialogues  is  summer’s  clocking.

At  first  their  “caw”  is  bluntest  proclamation:

We  are  the  overseers  of  tarnation.

Come  warm  spring  afternoons  and  much  of  summer,

With  comic  delicacy  they  “clippety-clack”

And  always  keep  their  distance,  handsome-black.

With  rocks  and  pellet-guns  and  steel-toe  boot.

Stand  highest  up  of  buildings,  stroll  and  call

Then  something  puts  them  silent  in  the  Fall.

in 21st-century urban life with the same keen eye and

“Enclosure”, while here representing the confusing state of

doomed or hopeless love,  is also a reference to the fencing-in

of common pastures (The Enclosures), the removal of

ancient paths and the felling of old tree-groves – upheavals in

England’s countryside during The Industrial Revolution –

traumatic for Clare, who felt a deep communion with the land.

What happens to a dream deferred ?
Does it dry up
Like a raisin in the sun ?
Or fester like a sore –
And then run?
Does it stink like rotten meat ?
Or crust and sugar over –
Like a syrupy sweet?

Or does it explode ?

poet and novelist at the forefront of The Harlem

Renaissance.  Born in the small town of Joplin, Missouri,

he would later capture in his poems the vibrancy of his

is perhaps the most famous American poem of the

Naked he lies in the blinded room,

chain-smoking, cradled by drugs, by jazz,

as never by any lover’s cradling flesh.

Miles Davis coolly blows for him,

Lady of the pure black magnolias,

sobsings her sorrow and loss and fare ye well,

dryweeps the pain his treacherous jailors have

released him from for a while.

His fears and his unfinished self await him

down in the anywhere streets.

He hides on the dark side of the moon,

takes refuge in a stainedglass cell,

flees to a caulkless country of crystal.

Only the ghost of Lady Day

knows where he is,  only the music,  and he

swings those swings beyond

born in Detroit.  His first book,  Heart-Shape in the Dust,

In 1944 he joined Fisk College where he taught for more

than twenty years as professor of English,  followed by

a decade at University of Michigan.

about a friend – and drug addiction. 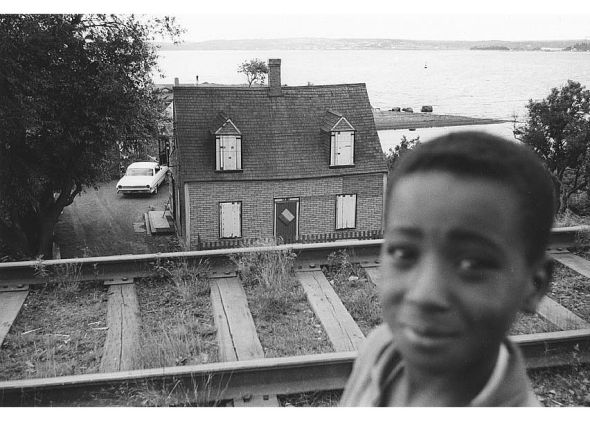 – Listen here, son.  Did you think this were gonna work ?

Were you fool enough to think this were gonna work ?

leave it.  They don’t intend to let us git it back.  You

ain’t a place.  Africville is us.  When we go to git a

we from Africville, we are Africville !  And we don’t git

no job.  It ain’t no place, son.  It were their purpose to

git rid of us and you believed they done it – could do it !

You think they destroyed something.  They ain’t.  They

took away the place.  But it come’d round, though.  Now that

culture come’d round.  They don’t just go out there and

find anybody to talk about Africville, they run find us,

show us off – them that’ll still talk, cause we Africville.

That ain’t the purpose …fer

whilst your edifice is forgone destroyed, its splinters

will infix hope in the heart of every peoples.  Yet,

let’s see this thing clearer.  If our folk see you in the

suit, we may git the idea we can wear it.  The suit might

fall apart, but, son, it be of no notice.  We need the

example.  Now go back …and put you dwelling up again.

Frederick Ward has been described as “the most

undeservedly unsung poet in all of English-Canadian

Born in 1937 in Kansas City, Missouri, the Black-American Ward

came to Canada in 1970 – just passing through Halifax – and

ended up staying. There he me met Black Nova Scotians recently

turfed out of their old community – Africville – which was

bulldozed by the city to make way for a dumpsite.  Their stories

became the basis of his 1974 novel, Riverlisp: Black Memories.

The poem above is from Ward’s 1983 poetry collection,

Photograph:  Young boy with, in the background, Ralph Jones’ house boarded up for demolition

The Original Dog of The Americas

The Royal Dog of the Aztecs !

I am famed for my smooth skin,  my energy,

a playful mind and affectionate nature.

I have lasted to this day…

No other animal has stood – sunburnt –

atop the temple of Teotihuacán.

I have quivered beside immense, reclining Chac-Mool,

when his belly-bowl was full of fresh blood.

I have splashed in Xochimilco with royal maidens;

I have floated in salty Zumpango with wrinkled old priests.

when He plays patolli;   I have leapt for the ball

when it bounces off the buttocks of nobles engaged in

I have licked the copal-xocotl from His divine ankles,

when Moctezuma emerged from His temazcal;

I have nuzzled His armpits inside His bed-chamber,

wearing my collar of quetzal plumes.

I have pricked my paws on metl thorns,

trying to sniff out chinicuiles to eat;  singed them

while stealing tlaxcalli off the comal.

I have lapped up pulque from my Master’s cup

– wobbled then fell down;  been bitten by nimble Coyote.

I have suckled pups at my own teats;

and my seed has reached the womb of

For centuries I throve at the pinnacle.

I am the youthful spirit of the ancient world,

and though the centre has shifted,

neither do I dance at the periphery…

Escúchame – whoever you may be –

Let me teach you to live in the modern world…

Italicized words are in the Náhuatl (Aztec) language:

– in Aztec religion, a gift to mankind from the god Xolotl

to guide the dead on the journey to the AfterLife.

“Xolos” were much-loved companion dogs, but

some were raised separately and plumpened

to be served at Aztec banquets.

patolli  –  board game involving gambling, played by the

Aztecs and the Mayans

tlachtli  –  skilful ballgame played on a stone court where

5 lbs. (invention of the Olmec people) off their hips or

rear-ends – it is still played in the 21st century

copal-xocotl   –  the plant ‘saponaria americana’, the

root of which provided a sudsy soap

quetzal  –  forest bird of Central America and Mexico, with

tlaxcalli  –  flat maize bread, a daily staple of the Aztecs and

Mayans,  still eaten in Mexico and called by its Spanish

metl  (maguey or agave)  –  Mexican plant of the “succulent”

family, used in the making of both pulque and tequila

version for the modern kitchen

sap of the metl plant – a ritual beverage of the Aztec

nobility and later a popular drink of the Mexican masses

there’s been the time of

There’s been the time of

hate  (that most handsome lizard).

The tongue of tears has spoken

– such an achievement, that clarity of heart ! –

but even its time has passed.

Savour all the colours:

maguey-liquor with chile, cinnamon for cocoa.

hipsters from the Capital,

The youngest kids are watching…

we’ll be able to behold on our face,

the litmus test – that sunflower Hope.

To this Life I say: 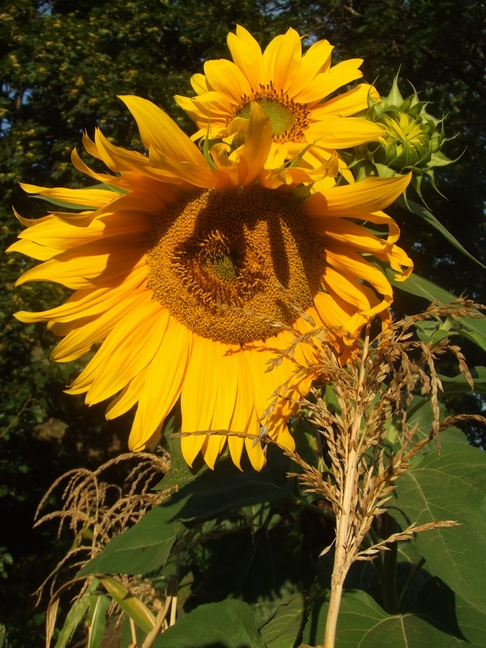 Doggy, doggy, who’s got your bone ?

Somebody stole it from your home.

Maybe the Man in the Moon – with the Spoon !

There was an old woman
lived under a hill,
and if she’s not gone,
she lives there still.

Three wise men of Gotham
went to sea in a bowl

– if  the bowl had been stronger
my song had been longer.

Give bread to my doggy Captain,  Moon-o!

My mummy is a Rose,

A Carnation is my dad,

And I’m the little Bud

That they just had !

Sticks and stones may break my bones

– but words will never hurt me.

– pero las palabras necias no me van a dañar.

For every Evil under the sun

there is a remedy – or there is none.

If there be one, try to find it

– if there be none, never mind it.

Translations from Spanish into English by Alexander Best

And here’s one more…

“A Place to Stand”

was the unofficial anthem of the

province of Ontario – during the

Instantly, the lyrics were altered by

naughty little boys across the country… 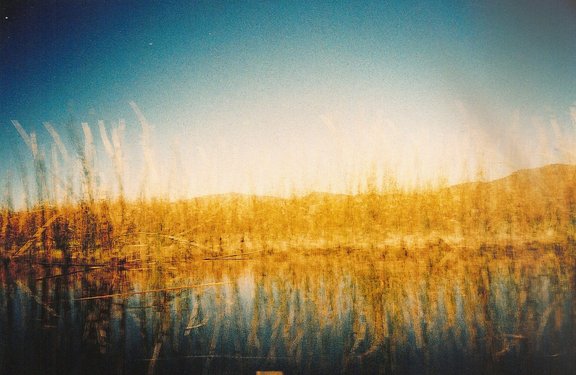 Between Bolivia and Peru I forget who I am
and the guides continue to keep course. Here
the waves against the boat and the old man
braced against the tiller are important.
I turn and look directly
at him. Not a word parts his lips
and I think of the depth of the lake
the elixir of rhythm tradition.

We are out past the reed islands
past the fishermen
the birds
out among one another inside
a path deep and blue as a prayer.

The old man’s companion decked out in bright wool
cap and sweater fiddles with an old oily motor
he somehow keeps going. Like the old man
his Indian life is carved into his face
and defines his presence and like the old man he knows
he is taking me somewhere I have never been
past everything except ourselves
on this water       under this sky.

A professor at Carleton University, he teaches creative writing and Native literature.

He has just completed a biography of Norval Morrisseau – “Man Changing into Thunderbird”.

The poem above is from his first collection, Opening In The Sky (Theytus Books, 1994).