Kenojuak Ashevak was born in 1927 at the Inuit camp of Ikirasaq on Baffin Island in the North West Territories of Canada. She died exactly one year ago today – January 8th – and we are honouring her now, one year later, because ZP did not ‘post’ during the month of January 2013.

One of the first women to make drawings in Cape Dorset during the 1950s, Kenojuak used graphite, coloured pencils and felt-tip pens. With the assistance of Inuit art promoter James Houston, Kenojuak made the transition to soapstone-cut print-making. Her first such print dates from 1959 and is called Rabbit Eating Seaweed. It is based on a needle-work and appliqué design she had made on a sealskin bag. Kenojuak would draw freely, with confidence in line and form, then would have her drawings transferred/cut into the print stones by one of the stone-cutters at the new West Baffin Eskimo Co-operative Workshop (“Senlavik”) which started up in 1959. After the stone-cutter had completed his incisions she would then apply one or two colours of inks to the printing surface. Sometimes the strong arms of Eegyvudluk Pootoogook would help apply the right paper-upon-stone pressure to complete the print. Kenojuak’s The Enchanted Owl, from 1960, is one of the most famous Canadian artworks internationally – instantly recognizable and emblematic of the 1960s and an “Idea” of The North.

Kenojuak was married three times and bore eleven children by her first husband, a hunter named Johnniebo Ashevak (1923-1972). At the time of her death from lung cancer in 2013, she was living in a wood-frame house in Kinngait (formerly Cape Dorset), Nunavut.  A cheerful personality, Kenojuak was always humble about her artistic success, and thankful for the “gift” of her talent. 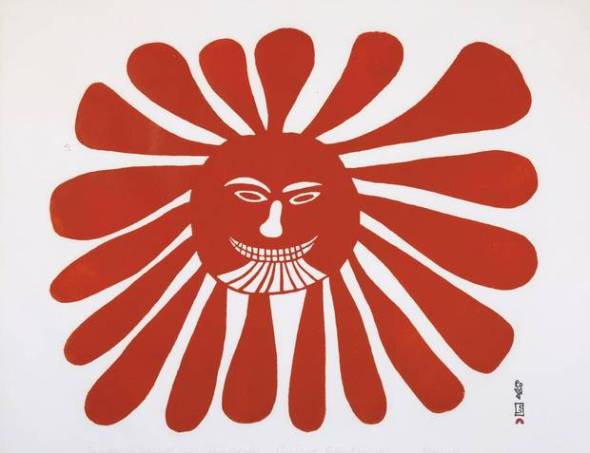 Kenojuak_The Woman who lives in the Sun_1960 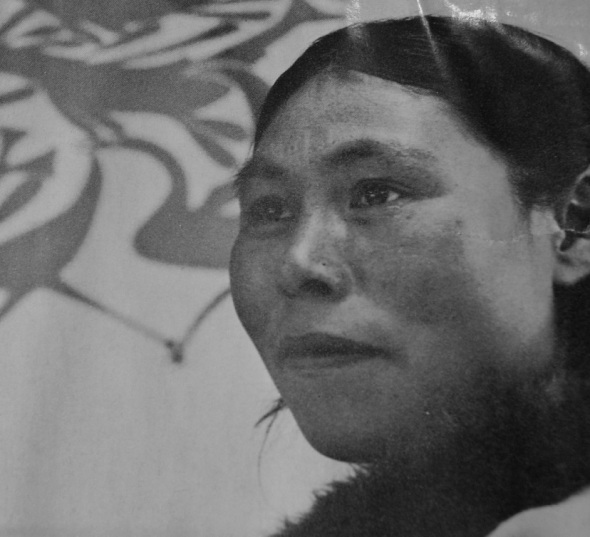 Kenojuak photographed in 1963 in front of one of her prints 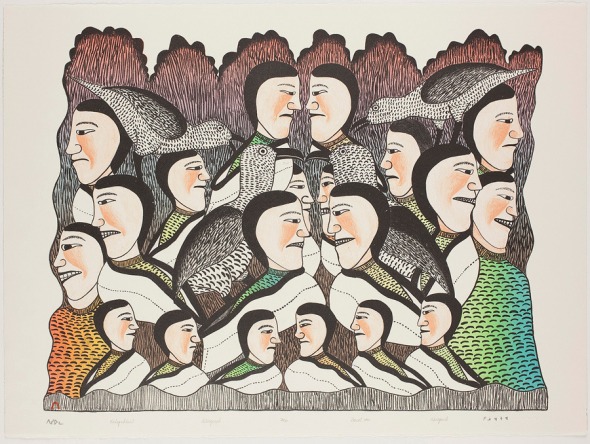 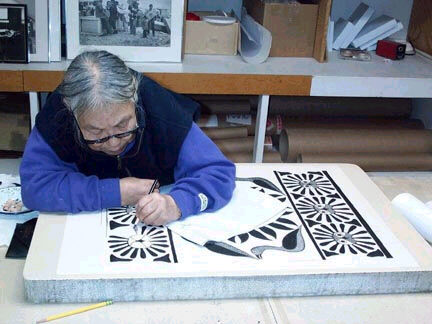 Kenojuak at work on Owl’s Treasure in 2002 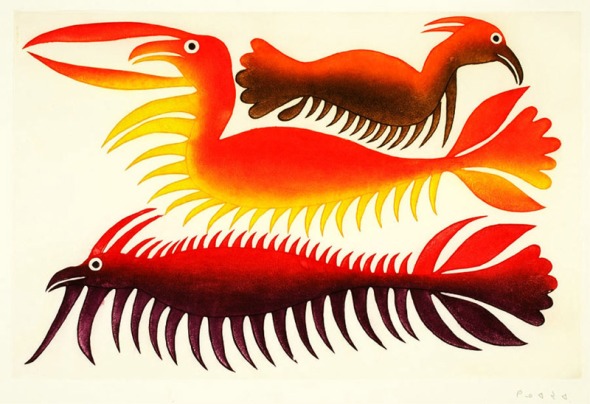 Kenojuak in 2009, holding a 1968 photograph of herself with husband Johnniebo Ashevak 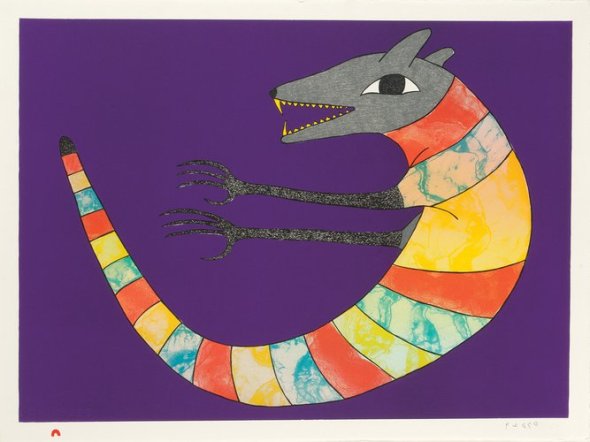 “Yeah Bro, I should say we do have Eskimo Lies”: the poetry of Inuit writer Norma Dunning

Posted: April 25, 2013 | Author: Zócalo Poets | Filed under: English, Inuktitut, Norma Dunning | Comments Off on “Yeah Bro, I should say we do have Eskimo Lies”: the poetry of Inuit writer Norma Dunning

Found on Wikipedia under “Eskimo Pie”:

My response to the ad:

I should say we do have

Not only in N. Canada and

Urban centers, but in

tions of all flavors.

Eskimo Lies is a

and by our general public

The Home of PASTEURIZED 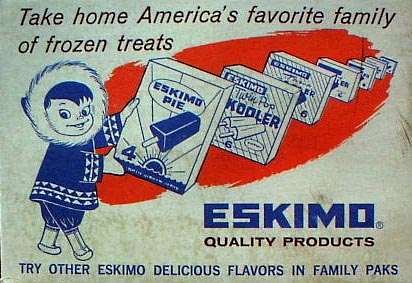 Oh give me a piece of that Eskimo Pie.

An entire grouping of humanity

Smiling inside a padlocked fur-ringed space

Include 1 tbsp of vanilla and

Put them in their place

Along with their mother tongues

And vanilla in a double-boiler

Turn the heat on high 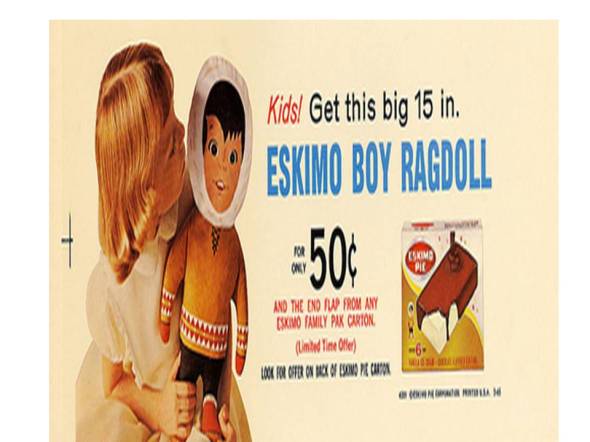 Bring to a boil

Removing all their relatives

Fold in the whipped cream

Pour into a pie plate

To the Eskimos of Canada

We came here to make them better

Teaching them church and knitting sweaters

Changed their names and made them right

Taught them how to wash their hands

Took them off their hostile lands

Bringing them to our enlightened age

Gave them names on a page

They’re happier than they’ve ever been

A better side of life they have finally seen

Our mission is soon complete

They will no longer eat raw meat

We’ll soldier on in our god’s name

These lowly people we will tame

They will thank us for this soon one day

And on their land we will forever stay

I gave you a necklace made out of sting

I told you to wear forever and always

I had a number put on it

I told you to remember it always

I said it was better than your name

It is oh it is and oh it still is!

If you didn’t have it I won’t be yours

Without it there would be no happy ever after

I told you to write it on all pieces of paper

I will and I have and I must and I do!

This necklace is the best thing that’s ever

I seem to be lacking air or is

it hair or do I

There is more to this lamp than the lighting

of it. Shared in its shadows are laughter,

crying and the tears of so long ago.

The tears of a sickness changing us for

ever. Echoes of tuberculosis.

Once we were well and we gathered manniq. (wick of moss)

We slept in peace under spring stars hearing

Our giggles and sighs mixed only with the

sounds of the earth. Disease took us from

home and away, far away to stay locked

in the prison of white walls. To cough up

blood of my puvak and long for home. (lung)

No more the qulliq to warm our spirits (stone lamp)

Warm our hearts, heat our lives, feed our stomachs.

Our revolution came in Quallnaat

Bacteria and the light of the

blowing out the wick of what we once were.

For Mini Aodla-Freeman, the last living Inuit woman in Canada who knows the traditional uses of the Qulliq. She is the last keeper of this traditional Inuit flame.

In the poet’s words:

My name is Norma Dunning. I am a Beneficiary of Nunavut and a first-year M.A. Student at the University of Alberta with the inaugural class of M.A. Students in the Faculty of Native Studies. I am an urban Inuit writer. My M.A. Thesis is based on the Eskimo Identification Canada System which ran in Canada from 1941 to 1978. It is a system, simply put, that replaced Inuit names with numbers. The University of Alberta has been very kind towards my writing and I have been awarded the James Patrick Follinsbee Prize for Creative Prose (2011) and the Stephen Kapalka Memorial Prize for Prose (2012). My creative work, both prose and poetry, has never been published in hard copy. This does not stop me from writing and I would encourage all writers to remember that we write because of what is inside of us needing to get out onto a page.