“And his wild harp slung behind him”: lyric poems of Thomas Moore for St. Patrick’s Day

Thomas Moore (1779-1852)
The Minstrel Boy (song composed around 1800)
.
The minstrel boy to the war is gone,
In the ranks of death you’ll find him;
His father’s sword he has girded on,
And his wild harp slung behind him;
“Land of Song!” said the warrior bard,
“Though all the world betrays thee,
One sword, at least, thy rights shall guard,
One faithful harp shall praise thee!”
.
The Minstrel fell! But the foeman’s chain
Could not bring his proud soul under;
The harp he loved ne’er spoke again,
For he tore its chords asunder;
And said “No chains shall sully thee,
Thou soul of love and bravery!
Thy songs were made for the pure and free
They shall never sound in slavery!”
. . .
Moore set his patriotic poem, The Minstrel Boy”, to the melody known as The Moreen, an old Irish air. It is believed that the poet composed the song in remembrance of friends he’d known while studying at Trinity College, Dublin, and who had taken part in / were killed during, the Irish Rebellion of 1798.
. . .
Thomas Moore
The Last Rose of Summer (written in 1805)
.
‘Tis the last rose of summer,
Left blooming alone;
All her lovely companions
Are faded and gone;
No flower of her kindred,
No rosebud is nigh,
To reflect back her blushes,
Or give sigh for sigh.
.
I’ll not leave thee, thou lone one!
To pine on the stem;
Since the lovely are sleeping,
Go, sleep thou with them.
Thus kindly I scatter,
Thy leaves o’er the bed,
Where thy mates of the garden
Lie scentless and dead.
.
So soon may I follow,
When friendships decay,
And from Love’s shining circle
The gems drop away.
When true hearts lie withered,
And fond ones are flown,
Oh! who would inhabit
This bleak world alone?
. . .
Moore’s poem, The Last Rose of Summer, was composed in 1805 while he was visiting Jenkinstown Park in County Kilkenny.  It was later set to a traditional tune called “Aislean an Oigfear” or “The Young Man’s Dream”, which had been transcribed by Edward Bunting in 1792 based on a performance by harper Donnchadh Ó hÁmsaigh (Denis Hempson) at the Belfast Harp Festival.  The poem and the tune together were published in December 1813 in volume 5 of a collection of Moore’s work called A Section of Irish Melodies.

Thomas Moore
The Harp that once through Tara’s Halls…
.
The harp that once through Tara’s halls
The soul of music shed,
Now hangs as mute on Tara’s walls,
As if that soul were fled.
So sleeps the pride of former days,
So glory’s thrill is o’er,
And hearts, that once beat high for praise,
Now feel that pulse no more.
.
No more to chiefs and ladies bright
The harp of Tara swells;
The chord alone, that breaks at night,
Its tale of ruin tells.
Thus Freedom now so seldom wakes,
The only throb she gives,
Is when some heart indignant breaks,
To show that still she lives.
. . .

The poems featured here were chosen by my mother, who was born Eileen Thompson, of Belfast, Northern Ireland.  Her remarks:

When I was about fourteen I went with a choir to Ulster Hall, a Victorian concert hall in the centre of Belfast. The occasion was a choral concert. I wore the “costume” of an Irish colleen. My cloak was green and my skirt had a satin horizontal stripe. My shoes I clearly remember: black oxfords – well polished. I stood alone, stage left, with a spotlight shining on me, and I sang The Rose of Tralee, not one by Thomas Moore, yet a popular old ballad just the same. And that was my singing début!  The Last Rose of Summer I learned several years earlier, at Mullaghdubh Primary School, when we were evacuated to Islandmagee after the first air raid on Belfast in April of 1941.

Irish songbook_published in 1892 in the USA, with an engraving of Thomas Moore on the cover

Thomas Moore, who would later be renowned for poems and songs such as “The Minstrel Boy”, “The Last Rose of Summer” and “Believe Me, If All Those Endearing Young Charms”, visited Canada when he was 25 years old. He wrote “A Canadian Boat Song” during his time here in 1804.

*St. Anne’s:   Moore visited this church – Ste-Anne-du-Bout-de-l’île–located in the town of Ste. Anne de Bellevue, on the tip of Montreal Island where the St. Lawrence River joins the Ottawa River. 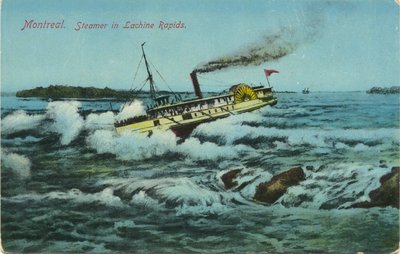 The Lachine Rapids, near Montreal Island_early 20th century postcard_These are The Rapids that Thomas Moore wrote about in his A Canadian Boat Song.

My mother Eileen is a native of Belfast, Northern Ireland, though her family emigrated to Canada more than sixty years ago. Ma is in her eighties now, and she most definitely lives in the “here and now”. Yet she has powerful memories of those early years in the new country. She tells me: “I learned A Canadian Boat Song in the early 1950s, after coming to Canada. It was a camp song for the Eaton’s Girls’ Club up at Shadow Lake near Uxbridge. …I also have a memory from back in Ireland: the sound of a marching flute band going by. As children, we simply followed the band, and whistled and sang, as they marched along. They were playing “The Minstrel Boy” by Thomas Moore – and all of it on flutes!”

For more favourite poems of my mother, click on the following ZP link: