From The Black Patti to Mamie Smith 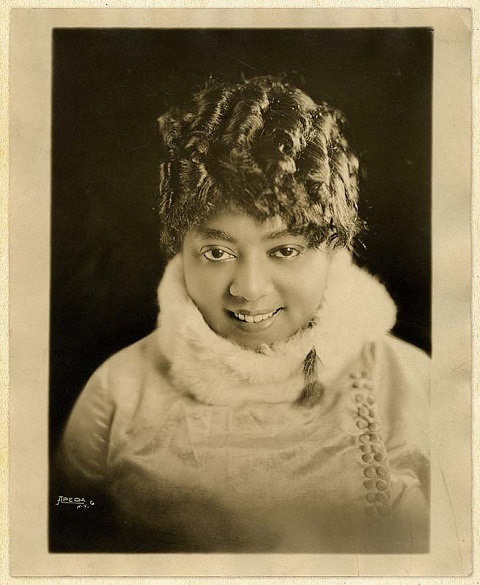 ZP_Mamie Smith, 1883 to 1946, vaudevillian and Blues singer who was the first black woman to cut a Blues record. In 1920, in New York City, she recorded the first million-seller by a black singer – two songs by Perry Bradford – Crazy Blues and It’s Right Here For You – If You Don’t Get It, T’ain’t No Fault of Mine.

ZP_Gertrude Ma Rainey, 1886 to 1939, and a Suitor, in The Rabbit Foot’s Minstrels touring music and theatre company, around 1915_Rainey was one of the earliest Blues singers and among the first to record. 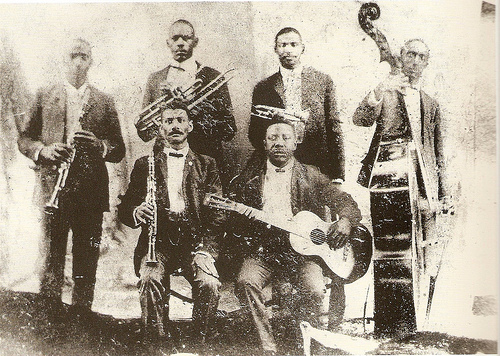 ZP_Buddy Bolden (top row, second from right) and his Orchestra, 1905. New Orleans native Bolden combined a looser form of Ragtime with Blues, and by adding brass instruments from marching bands to these rhythms and moods he helped to create Jazz.

ZP_Scott Joplin, 1867 to 1917, was one of a handful of ingenious musical synthesizers of the 1890s, blending John Philip Sousa style marches with African syncopation, thereby creating Ragtime music. His Maple Leaf Rag from 1899 was played on brothel and parlour pianos across the U.S.A._Sheet music for Pine Apple Rag, 1908.

Da lady folks all ‘bused him, sed he knowed it wus’n right

I felt sorry fuh Mistuh Adam, an’ I felt like puttin’ in,

‘Cause I knows mo’ dan dey do all ’bout whut made Adam sin.

I knows down in my heart – he’d-a let dat apple be,

He nevuh knowed no pickaninny life.

He started in a great big grown up man, an’ whut is mo’,

He nevuh had da right kind uf a wife.

I knows down in my heart he’d-a let dat apple be,

ZP_Aida Overton Walker in the all-black Broadway musical, In Dahomey, with lyrics by Paul Laurence Dunbar, 1903

ZP_Madame Matilda Sissieretta Joyner Jones a.k.a. The Black Patti, 1869 – 1933_Madame Jones was an opera singer who gave recitals of arias by Gounod and Verdi along with sentimental songs such as The Last Rose of Summer. She was the first black singer to perform at Carnegie Hall. Though she tried for leads at The Met, the institutional racism of the era prevented her from rising as she should’ve in the world of Opera. Finding herself barred from most concert halls she formed her own classical-music and variety-act touring company, The Black Patti Troubadours, which gave her a comfortable living until around 1915, when the concert-going public’s musical tastes shifted more toward Tin Pan Alley’s bluesy or jazzy pop-songs. Poster from 1899