“The Shyp of Folys of the Worlde” (1509), translated by Alexander Barclay from Sebastian Brant’s “Das Narrenschiff” (1494)

The Ship of Fools was as popular in its English dress as it had been in its original German garb.  Here was a new satirical literature, itself a product of the mediaeval conception of The Fool.  But now the figures are no longer abstractions;  they are concrete examples of Folly:  of the bibliophile who collects books but learns nothing from them, of the evil judge who takes bribes, of the procrastinator, of those who eagerly follow fashion, etc…

Das Narrenschiff (The Ship of Fools) by German humanist and satirist Sebastian Brant (1457-1521) was first printed in 1494, with woodblock prints illustrating each of his 113 varieties of Fool.  In the next decade and a half the book was translated into several European languages – a “popular” book in its day, when the technology of the printing press was in its infancy.

The Ship of Fools’ verses describe sins and vices, really, rather than follies, and Brant’s didactic tone is reflected in Alexander Barclay’s translation.  The Scottish Barclay (1476-1552) took the liberties that only a poet – and a translator – can, in the fact that Barclay translated “oute of Laten, Frenche, and Doche…sometyme addynge, sometyme detractinge and takinge away suche thinges as semeth me necessary and superflue.”

Barclay’s poem/translation is written in the ordinary Chaucerian stanza, using language which was in fact more modern than the common literary English of his day (1509). 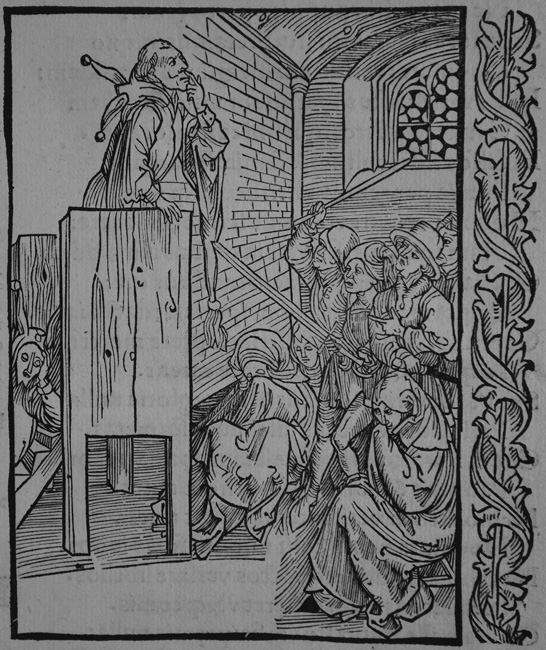 Some ar that thynke the pleasoure and ioy of theyr lyfe

And where loue before was to cause mortall hate

With the comonty, and many great estate

Suche is moche wors than outher murderer or thefe

And namely them that fautles ar and innocent.

Of conscience clene, and maners commendable

His tonge Infect his mynde abhomynable

But he that accused is thus without all faute

And so gyltles put to rebuke, and to shame.

His damnable byt is foule and venemous

He castyth out where he wolde haue debate

Engendrynge murder whan he his tyme can wayt

Where as any frendes lyueth in accorde

But howe beit that he thus pas forth his lyfe

If any hym for his dedes worthely accuse

Other ar whiche flater: and to euery thynge assent.

The worlde is nowe alle set on dyffamacion.

Suche ar moste cherisshed that best can forge a tale.

Whych shulde be moste had in abhomynacion.

And so they ar of wyse men without fayle.

But suche as ar voyde of wysdom and counsayle

Moche rather than they wolde to a noble sermon.

Lousers of loue, and infecters of Charite.

Unworthy ar to lyue here at large in this lyfe.

And there to remayne in pryson tyl they dye.

For with there yl tunges they labour to destroy

Concorde: whiche cause is of loue and of ioy.

So she and hyr boul felawes syttinge by the fyre.

Than shal the noughty doughter lerne of the bawdy dame.

By his warkes knowen is euery creature

For if one good, louynge, meke and charitable be.

He labours no debates amonge men to procure.

Leue of your lewdnes and note wel this sentence.

Unto them that sclandreth a man of Innocence.

Wo be to them whych by malyuolence

But wel is hym that wyth pacience can indure.