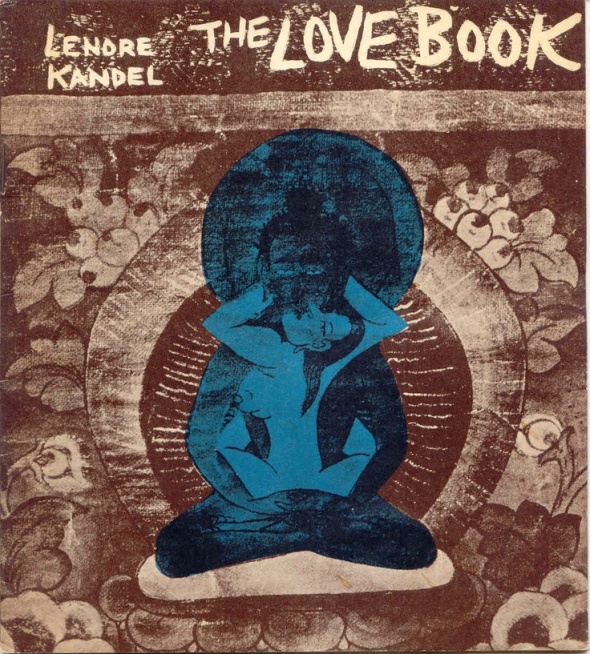 Late last year (1966) Lenore and her poetic description of the love act [using the word FUCK (ZP editor)] made headlines.
Lenore’s new book, published by Grove Press, is called, “Word Alchemy”.
“Word” is a four letter word, but hardly controversial. Alchemy might be more promising. With this in mind Les Gals editor Antoinette May climbed the three steep winding flights of stairs to Lenore’s apartment situated above a North Beach laundry.
The rooms that Lenore shares with her husband are musty, dusty and dark. “I don’t worry about inanimate things,” she explained unnecessarily. Once the latent housewife in Antoinette overcame the desire to tidy up, she became aware of the casual comfort of the place. Indian hangings and tapestries dominated the decor which definitely inclined one to recline for repose or anything else. The place had a definite lived-in, loved-in look that seemed pleasant and appropriate.
Lenore’s “Love Book” provoked numerous individuals (including the San Francisco pornography squad) not so much because of its subject matter, but, rather, by its choice of words.
Many people took offence when they found words heretofore confined to sidewalks and school desks suddenly appearing in printed books. Their outrage resulted in a lengthy court trial and the conviction of three booksellers. Lenore herself was not on trial, although everyone, including the judge, had difficulty remembering the fact.

LES GALS: Was shock appeal what it’s all about?
LENORE: Certainly not. I used that particular verb [FUCK (ZP editor)] because our English vocabulary is very limited. To intercourse with love just doesn’t sound right . Fornicate and copulate seem so medical.
LES GALS: Yes, but the verb you chose is an offence to a vast number of people.
LENORE: That’s because a word with a beautiful meaning—for two bodies to join through passion and love—has become aggressive. It’s a put-down word now, not a love word.
LES GALS: But don’t you think that by using the word so freely in your book, you’ll detract even more from its very special power and intimacy?
LENORE: No, if everyone used it appropriately—as a love word—it would be heard less.
. . .
LES GALS: Were you surprised by the guilty verdict?
LENORE: I was surprised that it was unanimous. It’s frightening. Police censorship is disrespectful to people. People should be allowed to make up their own minds. For some reason it’s okay to to sell black garter magazines that depict sex as something to snigger over. The movie ads—no matter how vulgar—are allowed as well, because they’re admittedly ‘bad’. Where I got in trouble was in saying that sex and the spirit are both beautiful parts of nature and equally divine. I don’t think there has been a trial since Salem where the words blasphemy or sacrilege have been used.
LES GALS: In the introduction to your new book –“Word Alchemy”– you are quoted as saying your favourite word is “yes”. Do you believe in sex for sex’s sake”?
LENORE: Sexuality with someone you love is far more than a physical act—but that doesn’t mean I’m putting down the physical act. I just want something more than that.
LES GALS: One witness for the defence said that reading your book would help married couples perform the love act better. Do you believe this?
LENORE: Not necessarily perform better, but I do think it could help them communicate better. Married people have so many hassles because they can’t communicate. It’s a terrible thing that two people who should be closest to each other often aren’t. So many men get this good girl-bad girl hangup. They have certain desires that they should express to their wives but instead they fulfill themselves with someone else. This is wrong and unnecessary.
. . .
LES GALS: If you had children would you allow them to read “The Love Book”?
LENORE: I think the important thing is to tell the truth. If children grow up in the environment where truth is a part of life they won’t have dirty minds. There’s certainly nothing harmful in my book, but an honest parent might say to a very small child, “This is a book you’ll understand and enjoy when you are older.” Children mature at different levels. It really depends on the individual. I think it’s a strange thing in our culture that death and torture are acceptable—children can see it everywhere they look—yet the love and tenderness between a man and a woman is something to conceal and feel guilty about. I think this must be very confusing to children. 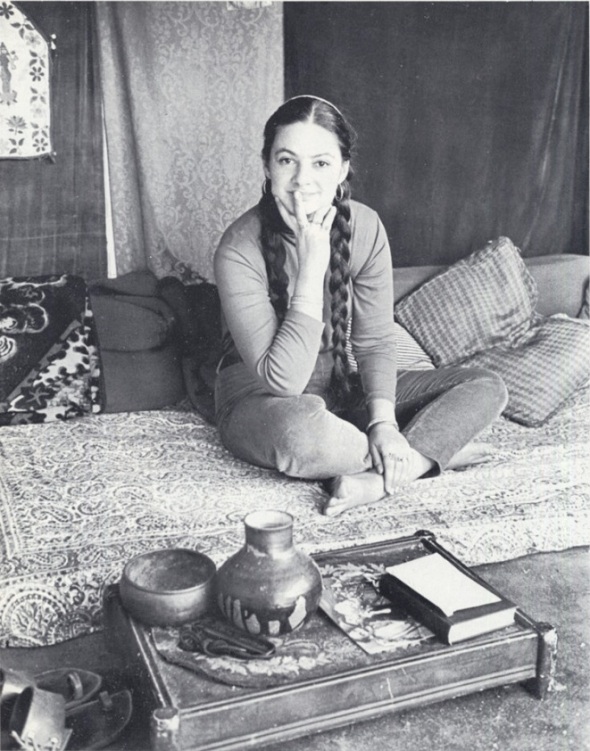 Lenore Kandel (1932-2009)
Invocation for Mitreya (from the collection Word Alchemy, 1967)
.
To invoke the divinity in man with the mutual gift of love
with love as animate and bright as death
the alchemical transfiguration of two separate entities
into one efflorescent deity made manifest in radiant human flesh
our bodies whirling through cosmos, the kiss of heartbeats
the subtle cognizance of hand for hand, and tongue for tongue
the warm moist fabric of the body opening into star-shot rose
flowers
the dewy cock effulgent as it bursts the star
sweet cunt-mouth of world serpent Ouroboros girding the
universe
as it takes its own eternal cock, and cock and cunt united
join the circle
moving through realms of flesh made fantasy and fantasy made
flesh
love as a force that melts the skin so that our bodies join
one cell at a time
until there is nothing left but the radiant universe
the meteors of light flaming through wordless skies
until there is nothing left but the smell of love
but the taste of love, but the fact of love
until love lies dreaming in the crotch of god. . . .
. . .
Nikki Giovanni (born 1943)
Seduction
.
one day
you gonna walk in this house
and i’m gonna have a long African
gown
you’ll sit down and say “The Black…”
and i’m gonna take one arm out
then you – not noticing me at all – wil say “What about this brother…”
and i’m going to be slipping it over my head
and you’ll rap on about “The Revolution…”
while i rest your hand against my stomach
you’ll go on – as you always do – saying
“I just can’t dig…”
while i’m moving your hand up and down
and i’ll be taking your dashiki off
then you’ll say “What we really need…”
and taking your shorts off
the you’ll notice
your state of undress
and knowing you you’ll just say
“Nikki,
isn’t this counterrevolutionary?”
. . . 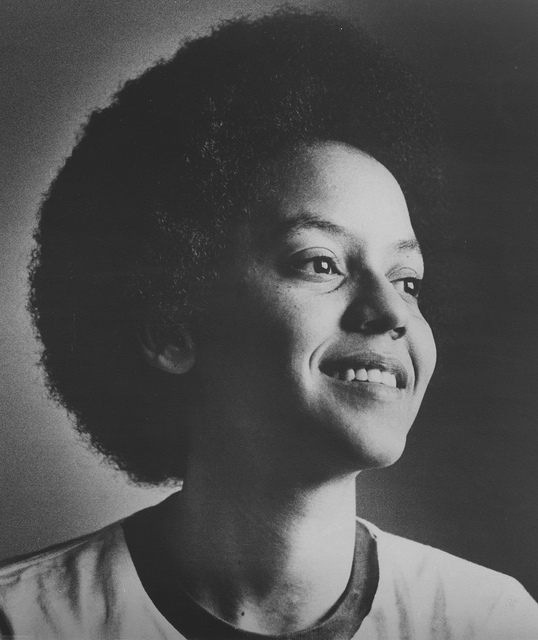 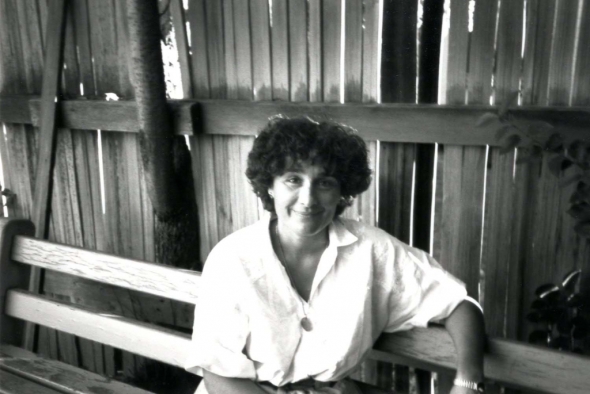 Olga Broumas (born 1949)
She Loves (1977)
.
Deep prolonged entry with the strong pink cock
the sit-ups it evokes from her, arms fast
on the climbing invisible rope to the sky,
clasping and unclasping the cosmic lorus *

Inside, the long breaths of lung and cunt
swell the vocal cords and a rasp a song
loud sudden overdrive into disintegrate,
spinal melt, video hologram in the belly.

Her tits are luminous and sway to the rhythm
and I grab them and exaggerate their orbs.
Shoulders above like loaves of heaven,
nutmeg-flecked, exuding light like violet diodes

closing circuit where the wall, its fuse box,
so stolidly stood. No room for fantasy.
We watch ourselves transform the past
with such disinterested fascination,

the only attitude that does not stall
the song by an outburst of consciousness
and still lets consciousness, loved and incurable
voyeur, peek in. I tap. I slap. I knee, thump, bellyroll.

Her song is hoarse and is taking me,
incoherent familiar path to that self we are all
cortical cells of. Every o in her body
beelines for her throat, locked on

on the key of G, clef du roman, tour de force letting,
like the sunlight lets a sleeve worn against wind, go. 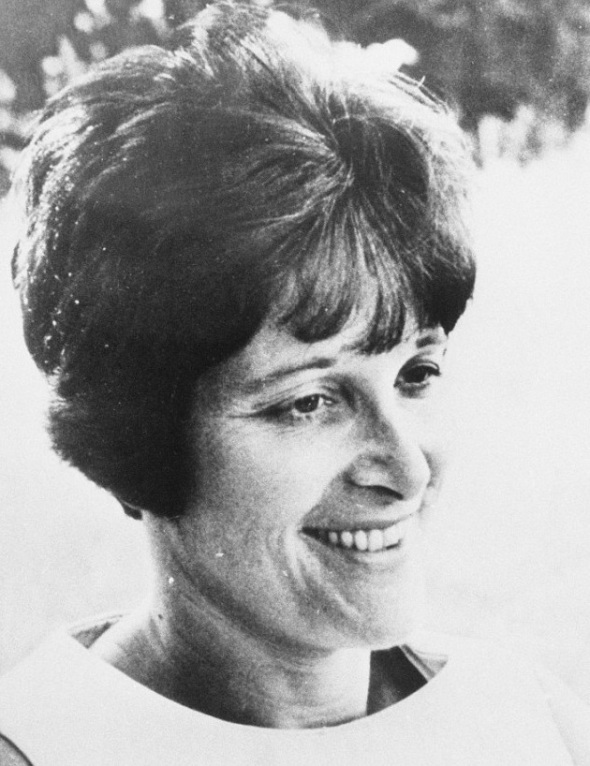 Maxine Kumin (1925-2014)
Together (1970)
.
The water closing
over us and the
going down is all.
Gills are given.
We convert in a
town of broken hulls
and green doubloons.
O you dead pirates
hear us! There is
no salvage. All
you know is the colour
of warm caramel. All
is salt. See how
our eyes have migrated
to the uphill side?
Now we are new round
mouths and no spines
letting the water cover.
It happens over
and over, me in
your body and you
in mine.

After Love (1970)
.
Afterward, the compromise.
Bodies resume their boundaries.

These legs, for instance, mine.
Your arms take you back in.

Spoons of our fingers, lips
admit their ownership.

and overhead, a plane
singsongs coming down.

Nothing is changed, except
there was a moment when

the wolf, the mongering wolf
who stands outside the self

lay lightly down, and slept.

. . .
Maxine Kumin
Looking back on my Eighty-First Year (2008)
.
How did we get to be old ladies—
my grandmother’s job—when we
were the long-leggèd girls?
— Hilma Wolitzer

Instead of marrying the day after graduation,
in spite of freezing on my father’s arm as
here comes the bride struck up,
saying, I’m not sure I want to do this,

I should have taken that fellowship
to the University of Grenoble to examine
the original manuscript
of Stendhal’s unfinished Lucien Leuwen,

I, who had never been west of the Mississippi,
should have crossed the ocean
in third class on the Cunard White Star,
the war just over, the Second World War
when Kilroy was here, that innocent graffito,
two eyes and a nose draped over
a fence line. How could I go?
Passion had locked us together.

till the last of the pursers
decamped, and I rushed back
littering the runway with carbon paper . . .
Why didn’t I go? It was fated.

Marriage dizzied us. Hand over hand,
flesh against flesh for the final haul,
we tugged our lifeline through limestone and sand,
lover and long-leggèd girl.
. . .