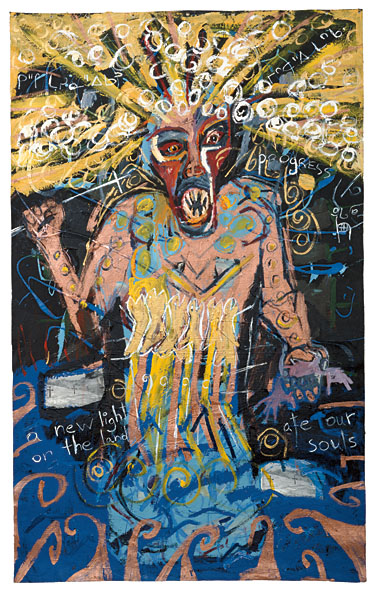 They spoke of the time

beings broke the stillness of water

retreating from the pollution

that rested on the skin of days

and the water became still

I went to a place to rest

and lay in the remnants of thunder

I collapsed in ripped and dried hollow earth

a fugitive of spent moments

which had outgrown their divinity

The old ones spoke of how the beings dug into the earth,

to retreat from the pollution on the skin of the earth

the old ones spoke of wîhtikow

took their prey in

draws us to the tracks

and pulls the light from the sky

no longer covered by glass

circle the wagons of families

in the grey, concrete forest

clung around his arms

with lines of memory

reached for the chewing tobacco

which slid through the

spaces of his mouth

and with the taste of tobacco

moving through the room

I remember the open windows

and people would fill the windows

with colours and movement

I remember the sound of his voice

up through his mouth

and layers of memory

formed from the shallow fog

of the early spring afternoon

the room held his voice

the voice of others

the fold of eternity

was my living link

to eternity and relatives

*  wîhtikow — a being who consumes other beings – greedy, like a vampire

**  kôkôcîs  — the name of the poet’s great-grandfather

Neal McLeod is Cree (having grown up on the James Smith reserve in Saskatchewan),  and Swedish, having had the fortunate opportunity to study abroad at the Swedish Art Academy at Umeå.  He has exhibited art work throughout Canada including at the 2005 exhibition au fil de mes jours (in my lifetime) at Le Musée national des beaux-arts du Québec – remounted at the Museum of Civilization in 2007.  In addition to being a painter he is also a curator:  his latest project was as co-curator of the exhibition James Henderson: The Man who Paints the Old Men which was organized by the Mendel Art Gallery in Saskatoon, Saskatchewan.

Neal is currently editing a volume entitled Indigenous Poetics.  In addition he is working on the following books: Dreaming Blue Horses – a novel, a collection of humour short stories entitled Neechi Hustle, 100 Days of Cree, a biography of Noel Starblanket, and a book of poetry called Casting Spells of Neechery.  He teaches Indigenous Studies at Trent University in Peterborough, Ontario.