Konstantin Kavafis / Κωνσταντίνος Καβάφης: “I went into the brilliant night and drank strong wine, the way the Champions of Pleasure drink.” 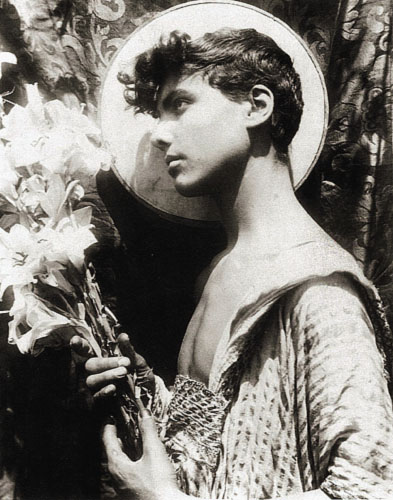 With no consideration, no pity, no shame,

they’ve built walls around me, thick and high.

I can’t think of anything else:  this fate gnaws my mind

– because I had so much to do outside.

When they were building the walls, how could I not have noticed!

But I never heard the builders, not a sound.

Imperceptibly they’ve closed me off from the outside world.

In these dark rooms where I live out empty days,

I wander round and round

trying to find the windows.

It will be a great relief when a window opens.

But the windows aren’t there to be found

it’s better if I don’t find them.

Perhaps the light will prove another tyranny.

Who knows what new things it will expose?

I didn’t restrain myself.   I gave in completely and went,

went to those pleasures that were half real,

half wrought by my own mind,

went into the brilliant night

the way the champions of pleasure drink.

It must have been one o’clock at night

or half past one.

A corner in a tavern,

behind the wooden partition:

except for the two of us the place completely empty.

The waiter was sleeping by the door.

No one could see us.

But anyway, we were already so worked up

Our clothes half opened – we weren’t wearing much:

it was a beautiful hot July.

Delight of flesh between

quick baring of flesh – a vision

that has crossed twenty-six years

and now comes to rest in this poetry.

This room, how well I know it.

Now they’re renting it, and the one next to it,

as offices.   The whole house has become

This room, how familiar it is.

The couch was here, near the door,

a Turkish carpet in front of it.

Close by, the shelf with two yellow vases.

On the right – no, opposite – a wardrobe with a mirror.

In the middle the table where he wrote,

Beside the window the bed

where we made love so many times.

They must be still around somewhere, those old things.

Beside the window the bed;

the afternoon sun used to touch half of it.

…One afternoon at four o’clock we separated

for a week only…And then 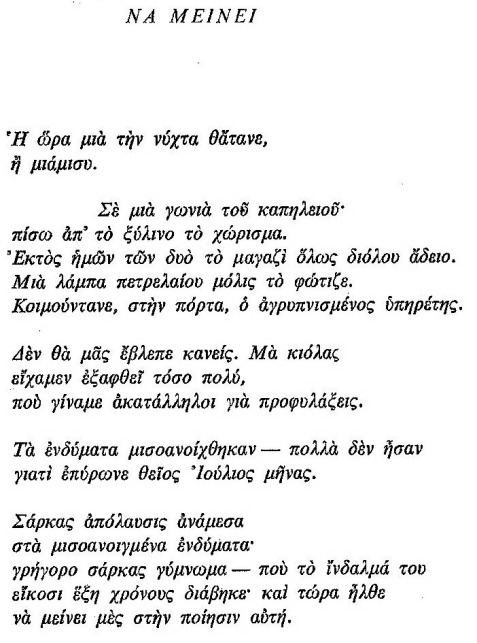 Before Time altered them

They were full of sadness at their parting.

They hadn’t wanted it:  circumstances made it necessary.

The need to earn a living forced one of them

to go far away – New York or Canada.

The love they felt wasn’t, of course, what it had once been;

the attraction between them had gradually diminished,

the attraction had diminished a great deal.

But to be separated, that wasn’t what they wanted.

It was circumstances.   Or maybe Fate

appeared as an artist and decided to part them now,

before their feeling died out completely, before Time altered them:

the one seeming to remain for the other always what he was,

the good-looking young man of twenty-four.

Translations from Greek into English © 1975  Edmund Keeley and Philip Sherrard

lived and died in the port city of Alexandria, Egypt.

His father had worked in Manchester, England, founding

an import-export firm for Egyptian cotton to the

textile industry.  Between the ages of 9 and 16 Constantine

was educated in England – Victorian-era England – and

these years became important in the shaping of his poetic

sensibility (which would only emerge around the age of 40.)

Though he was fluent in English, when he began to write poetry

in earnest it was to be in his native Greek.

Cavafy never published any poems in his lifetime, rather he

had them printed privately then distributed them

– pamphlet-style – to friends and acquaintances.

of his homosexuality – but he did feel much guilt over

be read as the mental anxieties of a “closeted” homosexual –

who was “Out” anyway.

Art – Poetry – that he’s ready to write openly of his love for men.

The poems he wrote when he was in his 50s, such as “Comes to rest”,

“The afternoon sun” and “Before Time altered them”, show a mature

poet describing the universal beauty and sadness of Love – and he

does it describing sex, passion and loss between two men.

A bad poet in love with the moon,

he counted terror as his only fortune :

and it was enough because, being no saint,

he knew that life is risk or abstinence,

that every great ambition is great insanity

and the most sordid horror has its charm.

He lived for life’s sake, which means seeing death

as a daily occurrence on which we wager

a splendid body or our entire lot.

He knew the best things are those we abandon

— precisely because we are leaving.

there s just one place to live – the impossible.

but was always escorted by a certain stoicism

that helped him walk the tightrope

or enjoy the morning’s glory,

and when he tottered, a window would appear

for him to jump toward infinity.

He wanted no ceremony, speech, mourning or cry,

no sandy mound where his skeleton be laid to rest

(not even after death did he wish to live in peace).

He ordered that his ashes be scattered at sea

where they would be in constant flow.

He hasn’t lost the habit of dreaming :

he hopes some adolescent will plunge into his waters.

Reinaldo Arenas came into conflict with Fidel Castro’s government because of his openly-Gay lifestyle and because he managed to get several novels published abroad without official consent. He was jailed in 1973 for “ideological deviation”;  he escaped and tried to flee Cuba on an inner-tube floating in the Caribbean Sea.  The attempt failed and he was jailed again, this time at El Morro – the roughest prison in Cuba.  He wrote letters for the loved ones of murderers and thereby gained some respect.  Upon his release in 1976 the government forced him to renounce his work.  In 1980 he came to the USA – one of many Cubans in the Mariel Boatlift.  He settled in New York City where he mentored other exiled writers – but he was never happy, and he was Cuban till the end.  Diagnosed with AIDS in 1987 he committed suicide in 1990, penning these words in a last letter (written for publication):

“Due to my delicate state of health and to the terrible depression it causes me not to be able to continue writing and struggling for the freedom of Cuba, I am ending my life. . . I want to encourage Cuban people out of the country as well as on the Island to continue fighting for freedom. . . Cuba will be free – I already am.”

This is quite true

And greater than life’s self is.

No one down here can deny it

One kind of man

Looks on, without love or sin:

You’re wrong, I tell you again.

The only lie we find out in the future

Is that which seems

The truth that seems to fall in with our fates.

I’ve left off drinking, my friend.

Yes, I have set wine aside.

To see me drunk –

This is between us, you see –,

Take slowly up to your mouth

The glass meant for me,

Then pass it over to me.

A taça que me destinas,

The most important thing in life

We must foresee it

Where our eyes cannot really see it.

I think that dreaming the impossible

Of something that wants to live

And calls to us from afar.

Yes, the most important thing in life

And we must move

Translations from the Portuguese:  Fernando Pessoa

period of bohemianism leading up to the military coup

of 1926 and the establishment of the Estado Novo (New State),

A second edition of  Canções was

printed in 1922 – and this time it created a critical furor

as “Literature of Sodom”.   Botto made no secret of his

homosexuality – he flirted in public, and that took guts –

and many of his first-person-voice love poems are

frankly addressed to men.  Though Fernando Pessoa – one

of Portugal’s heavyweights in the Modernist movement (and also

the translator into English of Botto’s poems) – defended Botto in

print,  it was a defence of the aesthetic ideal of male beauty

– a Classical Greek (Hellenic) value that had influenced all

Mediterranean cultures – not a public endorsement of the fact that

Botto was writing about loving men.   Botto was just too ahead of his time;

he was “pushing the boundaries”,  as we call it now.

A conservative university-student league called verses such as

“Listen, my angel:  what if I should kiss your skin,

what if I should kiss your mouth, which is all honey within?”

“disgraceful language” and Botto a “shameless”

author, pressuring the government to take action, which it did,

for re-issuing the Songs of Botto;  he is a poet too little known

in the English language.