“Aunt Dinah, the Colored Cook, comes to join the Paper Doll Family”_McCall’s Magazine, April 1911_Aunt Dinah is presented in a realistic, straightforward manner, as all the dolls in this McCall’s series were.

In the early twentieth century, paper dolls were a popular plaything for children. Cheap and easy to make, these cut-out paper figures could be dressed with paper clothes attached by tabs. The figures were often of idealistic characters: beautiful children, perfect families, fashionable ladies representing the power élite of the day. Boxed sets and books could be readily bought in stores, but many were available in magazines and newspaper comic strips as a special treat for the kids.
.
From the late 1800s to the mid 1950s, black paper dolls were rare and stereotypical in white-owned North-American media. Black adult females were shown as maids or ‘mammies’, caregivers to young white children. Black children as paper dolls always had at least one garment that was tattered and patched, and black adult males were almost never shown.
.
The outstanding exception to the above stereotypes was the creation of Torchy Brown by a black woman cartoonist named Jackie Ormes. The Torchy Brown comic strips and accompanying paper dolls appeared in black newspapers such as the Pittsburgh Courier and Chicago Defender in the early 1950s. Torchy herself, created by Ormes in the 1930s, was a strong and glamorous woman-of-colour who certainly did not wear rags. With the advent of desegregation and the Black Power movement in the United States, more and more positive images of black paper dolls finally appeared.
.
The images shown here cover the early stereotypes. Yet one can understand that, at the time, many blacks may have been pleased to see any representations of themselves in prestigious magazines such as McCall’s and Woman’s Home Companion. It was also during this period – in 1939, to be exact – that Hattie McDaniel won an Oscar for portraying a ‘mammy’ in the film “Gone With The Wind”;  McDaniel was also featured in a paper doll book of the film.

Charming Rastus, gently stereotyped with patches and watermelon, was positioned as a friend of Little Louise, a blond, blue-eyed girl.

Patches and rags define pretty Farina, though Fattie’s costume is tattered too. This exquisite illustration was by Frances Tipton Hunter.

Katy’s black mammy has taken care of her ever since she was a little baby_painted by Katharine Shane_from Woman’s Home Companion, June 1927

What well-to-do little girl from The South wouldn’t have had her very own ‘mammy’ in 1927?

Mandy, a warm and loving creation by Canada’s Lydia Fraser.

Sam’s wardrobe defines a hard workin’ little guy: bellboy and newspaper seller.  As well – the ubiquitous patches on his overalls. 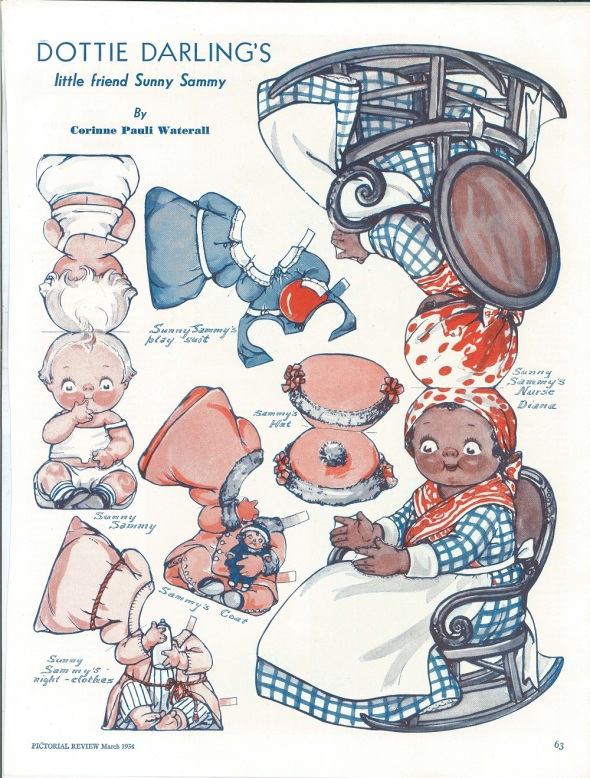 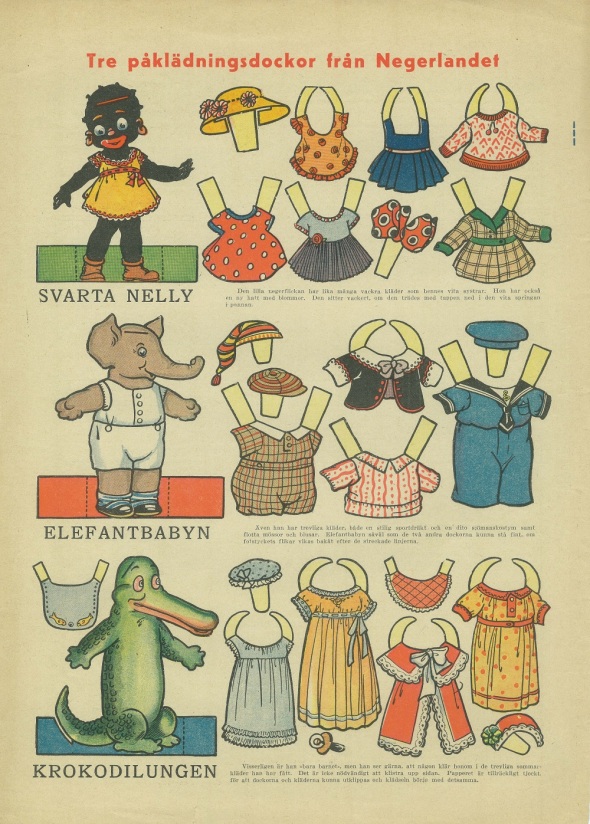 Black Nelly was a Swedish take on a little African girl, shown here with a totally European set of clothes.

Sweet Little Sambo seems almost to be a cartoon version of Rastus (second from top).

Effie Slivers was Lena Pry’s (mouthy) maid in this 1930s strip. Lucky Effie gets a dressy outfit, too. 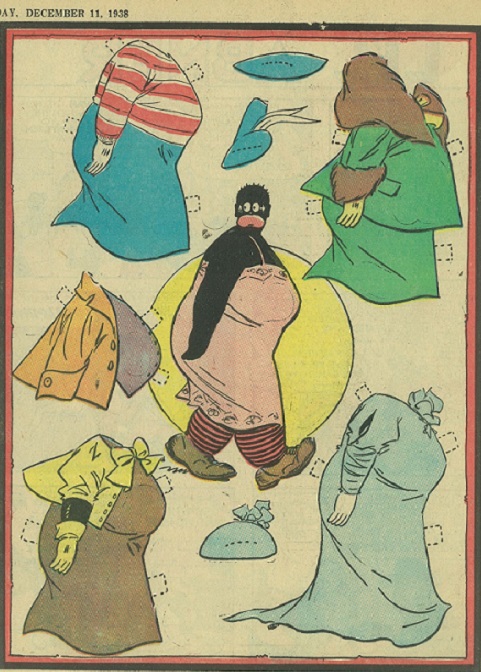 Opal was a stark contrast to slim, blonde Boots, star of the comic strip in which Opal appeared. Still, artist Martin did give her a rich wardrobe.

featuring the private collection of author, lecturer, and collector Arabella Grayson, and exploring the 150-year evolution of cultural images of African-Americans in paper dolls—from Little Black Sambo and Aunt Jemima to Jackie Robinson and Missy Elliott.

at The National Museum of Toys and Miniatures,