A Sioux Prayer (1887)
(Translation into English: Chief Yellow Lark)
.
Oh Great Spirit, whose voice I hear in the winds,
whose breath gives life to the world,
Hear me!
I come to you as one of your many children;
I am small and weak;
I need your strength and wisdom.
.
May I walk in beauty.
Make my eyes ever behold the red and purple sunset.
Make my hands respect the things you have made,
and that my ears be sharp to your voice.
Make me wise so that I may know the things you have taught your children:
the lessons you have written in every leaf and rock.
.
Make me strong; not to be superior to my brothers, but to fight my greatest enemy: myself.
Make me ever ready to come to you with straight eyes,
So that when life fades as the fading sunset,
May my spirit come to you without shame.
. . .
Biographical information about Yellow Lark from Agathos Dorea (David Hunnicutt):
“Yellow Lark, a Lakota Sioux Chief, wrote the lamentation [prayer, above] in the midst of severe persecution by U.S. 7th Cavalry soldiers during the division and segregation of the indigenous tribes who were, at that time, inhabiting the southwestern portion of what is now South Dakota. Unable to come to a peaceful resolution, the years-long ordeal ended with the epic massacre that took place at Wounded Knee (1890) where three hundred Lakota Sioux men, women and children were executed by U.S. soldiers when they refused to be relocated to the Pine Ridge Reservation.
Yellow Lark’s lament was a divine plea to let peace and understanding prevail – even in the midst of severe persecution. Peaceful until the end, Chief Yellow Lark remains an iconic figure among the Lakota Sioux peoples to this very day.
Sadly, Wounded Knee still remains in the midst of the storm. With the average family income hovering near $12,000 annually, and an unemployment rate exceeding 80%, Wounded Knee is located in the poorest county in the United States of America.”
. . . 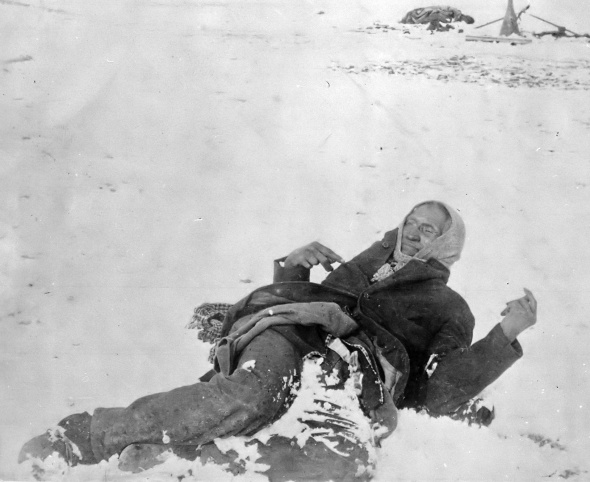 Spotted Elk lying dead after The Battle of Wounded Knee_December 1890

1891 Portrait of General L.W. Colby of Nebraska State Troops, holding baby girl Zintkala Nuni (Little Lost Bird), found on the Wounded Knee battlefield_This photograph is part of the long official history of the sentimentalization of Native genocide in the U.S.A.

Other songs/poems featured at ZP: