“Lift Every Voice and Sing” & Augusta Savage’s “The Harp” 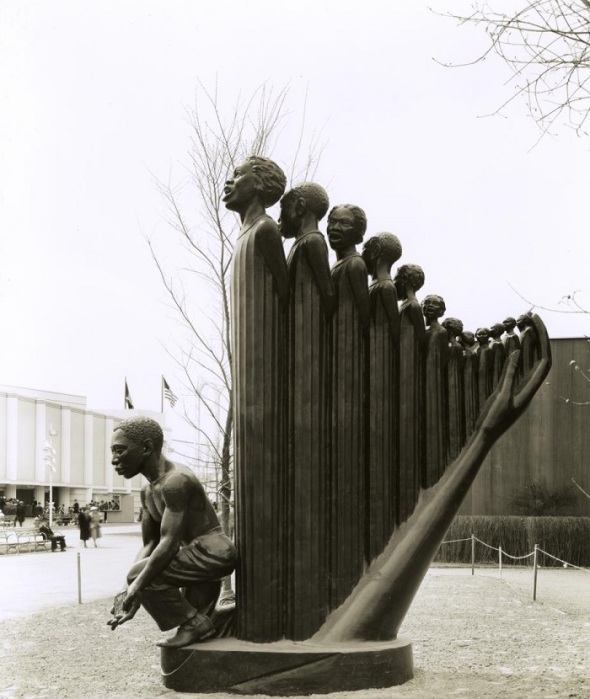 The Harp by Augusta Savage, displayed at the 1939 World’s Fair in New York City

“Lift Every Voice and Sing” is a song first written as a poem in 1899 by James Weldon Johnson (1871-1938).  It was Weldon’s brother John Rosamond Johnson who set the poem to music.  The poem was first spoken aloud by several hundred schoolchildren on February 12th, 1900, at the segregated Stanton School in Jacksonville, Florida, where James Johnson was principal. The recital of the new poem was meant to honour both visiting guest Booker T. Washington – and Abraham Lincoln, whose birth date fell on the same day.

Lift every voice and sing, till earth and heaven ring,
Ring with the harmonies of liberty;
Let our rejoicing rise, high as the listening skies,
Let it resound loud as the rolling sea.
.
Sing a song full of the faith that the dark past has taught us,
Sing a song full of the hope that the present has brought us;
Facing the rising sun of our new day begun,
Let us march on till victory is won.
.
Stony the road we trod, bitter the chastening rod,
Felt in the days when hope unborn had died;
Yet with a steady beat, have not our weary feet
Come to the place for which our fathers sighed?
.
We have come over a way that with tears has been watered,
We have come, treading our path through the blood of the slaughtered;
Out from the gloomy past, till now we stand at last
Where the white gleam of our bright star is cast.
.
God of our weary years, God of our silent tears,
Thou Who hast brought us thus far on the way;
Thou Who hast by Thy might, led us into The Light,
Keep us forever in the path, we pray.
.
Lest our feet stray from the places, our God, where we met Thee;
Lest our hearts, drunk with the wine of the world, forget Thee;

Shadowed beneath Thy hand, may we forever stand,
True to our God, true to our native land. 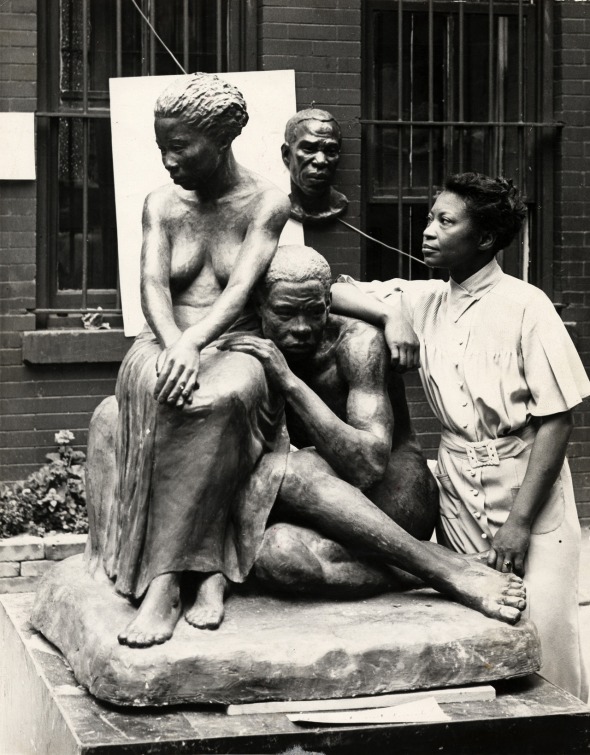 Augusta Savage (1892-1962), a Florida sculptor (born near Jacksonville) who grew artistically / worked in New York City during The Harlem Renaissance, was commissioned in 1939 to do a monumental plaster work for the New York World’s Fair. “The Harp” was strongly influenced by James Weldon Johnson’s poem “Lift Every Voice and Sing”.  The 16-foot tall piece was exhibited outside the Contemporary Arts building where it received much acclaim.  The sculpture depicted twelve stylized Black singers of graduated heights that symbolized the strings of the harp.  The sounding board was formed by the hand and arm of God, and a kneeling man holding music represented the foot pedal.  No funds were made available to cast “The Harp” in permanent bronze, nor were there any facilities to store it.  After the World’s Fair was over, “The Harp” was demolished, like most of the event’s art.