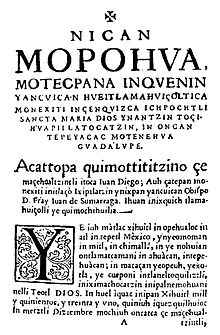 …..And as he drew near the little hill called Tepeyac

it was beginning to dawn…..

He heard singing on the little hill, like the song of many precious birds;

when their voices would stop, it was as if the hill were answering them;

extremely soft and delightful; their songs exceeded the songs of the

“Where am I? Where do I find myself? Is it possible that I am in the

place our ancient ancestors, our grandparents, told about, in the

land of the flowers, in the land of corn, of our flesh, of our sustenance,

possibly in the land of heaven?”…..

And then when the singing suddenly stopped, when it could no longer

be heard, he heard someone calling him, from the top of the hill, someone

was saying to him: “Juan, Dearest Juan Diego”…..

And when he reached the top of the hill, a Maiden who was standing there,

who spoke to him, who called to him to come close to her…..

And the stone, the crag on which she stood, seemed to be giving out rays…..

She said to him, “Listen, my dearest-and-youngest son, Juan,

Where are you going?”

And he answered her: “My Lady, my Queen, my Beloved Maiden!

I am going as far as your little house in Mexico-Tlatilolco,

(site of a former temple to the Aztec Earth-Mother goddess Tonantzin).

He knew her to be Santa María Totlaconantzin – Mary, Our

Precious Mother – and she spoke to him in his own language – Náhuatl.

Our Lady of Guadalupe – the name by which Juan Diego’s

Popularly, she is also called The Mother of All México.

Juan Diego was canonized by Pope John Paul II in 2002.

The above text – in the original Náhuatl (language of the Aztecs)

plus English translation by D. K. Jordan – is taken from

by Antonio Valeriano (1556),  and is the first chapter in the

written telling of the miraculous life of Juan Diego Cuauhtlatoatzin.

Valeriano was a native-Mexican scholar in three languages

– his birth-language, Náhuatl, plus Spanish and Latin.

crucial Náhuatl text from the 16th and 17th centuries

– a period of immense trauma during which a new race

– el Mestizo – and a new nationality – Mexican – were being forged.