Currently, at the Art Gallery of Ontario in Toronto, Canada, there are works from the permanent collection on view by three conceptual artists who use words – just a phrase, or a crammed page – as the locus of their art.  The artists are:  Janice Kerbel (born 1969, Canada, now living in London, England);  Ron Terada (also 1969, Canada); and Bruce Nauman (born 1941, USA).

Kerbel’s 5-poster series Remarkable, from 2007, presents the viewer with silkscreened prints on what is known as campaign poster paper – something used for 19th-century traveling circus billboard “announcements” or for election hoardings. Using bold black letters on white, Kerbel describes The Regurgitating Lady and The Human Firefly, as if inviting us in to a carnival side-show. Yet her characters are imaginary and so we become completely involved in the artist’s sometimes archaic use of language and her strong typographical arrangements. 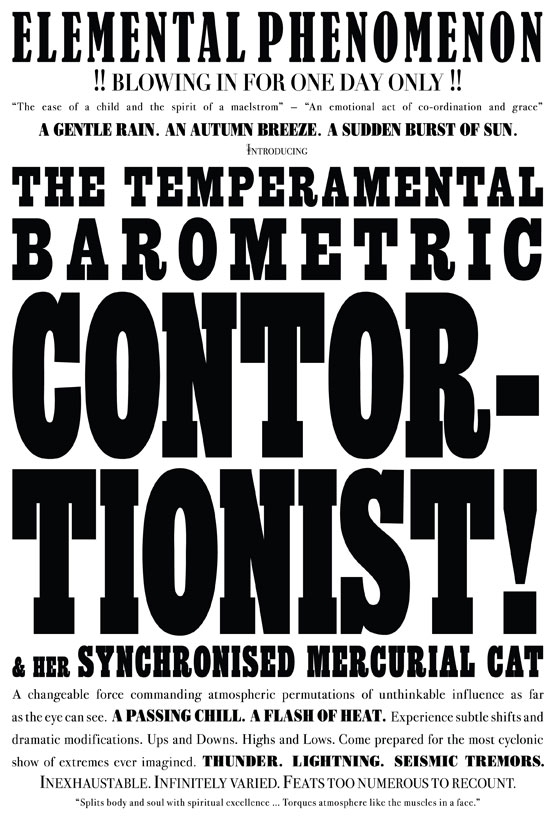 Vancouver-based Ron Terada has been very precisely focused in his art on phrases, sentences, written presentation. Twenty years ago he did a series of “ad paintings” that were a branching out of monochromatic minimalism in visual art. He worked in other media for several years then returned in 2010 with the large-scale white-on-black chapter pages of “Jack” (from a biography of painter Jack Goldstein, Jack Goldstein and the CalArts Mafia). Each chapter page is a painting – not a print. To the individual pages of a book, Terada brings the discipline of a serious painter.

Ron Terada’s neon text sculpture, It Is What It Is, It Was What It Was, reflects on present-day use of language, offering a general critique of complacency in society.  Severe High makes reference to threat definitions for Homeland Security in the USA. 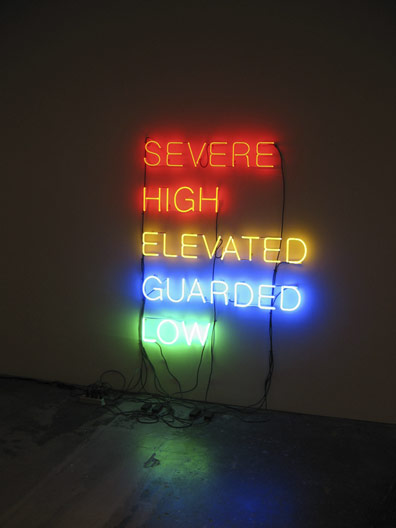 Bruce Nauman is a multimedia artist who has been heavy on “concept” and “performance”. The online, user-driven encyclopedia Wikipedia describes Nauman’s “practice” as being “characterized by an interest in language, often manifesting itself in a playful, mischievous manner.” And: [Nauman is] fascinated by the nature of communication and language’s inherent problems, as well as the role of the artist as a supposed communicator and manipulator of visual symbols.”
Among the A.G.O.’s pieces are two lithographs, Ah Ha (1975) and Pay Attention (1973): 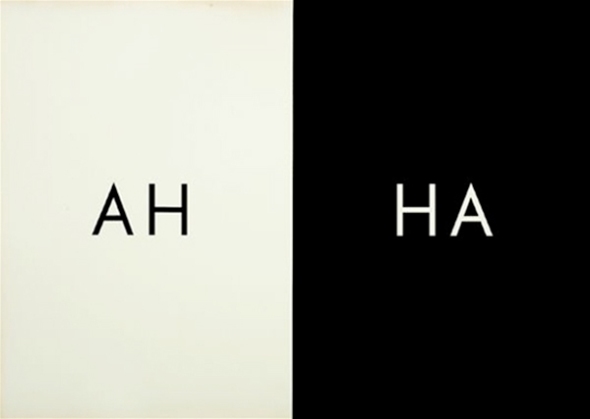 The reproduction of Pay Attention shown here (copied many times around the internet) is marred by the lack of print clarity in the word attention, which affects the viewer’s – reader’s ! – ability to quickly “get it”, that is, the power of the statement itself: Pay Attention, Motherfuckers! Interestingly, the print of Pay Attention that belongs to the A.G.O. is much clearer, so that all four words hit the mark. Which is important, especially since the statement is presented to us as a mirror image i.e. backwards.
Some of Nauman’s works now seem dated or stilted, but others have a fresh power in 2014 that comes out of our being awash now in “text” – as all words seem to be called these days – and “text” often without “context”. People’s ubiquitous use of :-) and, most especially, ;-), is indicative of the fact that words and phrases themselves are no longer adequate. What’s the tone – what’s the tone? It’s there you’ll find the meaning. The most effective of all the Nauman works at the A.G.O. is a 1985 videotape installation, Good Boy Bad Boy.  There are two older-model TV sets side by side, and each shows its own videocassette of a man – mid-40s black guy, and a woman – mid-40s, white – each of whom speaks a set group of short sentences which are statements, and then does it all over again, but altering the vocal tone. To hear each of them “perform” these statements twice, changing his/her tone, is a simple and clear demonstration of the complexity and muddiness of Language. The man says: I was a bad girl. You were a bad girl. We were baaad girls. We were baaaaad! And he’s enjoying remembering being a slut. The woman says the same things and she is a scolding puritan;  she may be speaking of a pet dog who pooped on the Persian carpet, or of two 12 year olds caught smoking cigarettes. Same phrases – entirely different meanings. A good contemporary example of this is two words: Hello and Whatever. Both have pleasant or neutral uses in conversation but both also can be altered via tonal change, pitch, even syllable stress, to communicate irate impatience or deliberate rudeness (Hello);  and casual defiance or a kind of hybrid attitude of blasé and crass (Whatever).

Nauman is quoted at the A.G.O. exhibit: “When language begins to break down a little bit it becomes exciting and communicates in nearly the simplest way that it can function. You are forced to be aware of the sounds and the poetic parts of words.”

Some of Honest Ed’s iconic handpainted signs on display in 2012_Wayne Reuben has been, for decades, that man with the calligraphy brush and the poster paints.

To whom shall we give the last Word? Why, Wayne Reuben – of course!
Wayne Reuben is the man behind the sometimes wacky ads, proclamations, commands and price cards at Honest Ed’s discount store, the building structure of which is a vivid Toronto landmark, what with the thousands of marquee bulbs that light up its red and yellow exterior. It’s Reuben’s handiwork when, out on the sidewalk, you read: Come In And Get Lost! And it’s Reuben’s blue and red paint letters that tell you, once you’re inside: Don’t Just Stand There – Buy Something!
Two weeks ago, hundreds of Torontonians lined up around the block to get the chance to pore over Mr. Reuben’s thousand-plus handpainted signs that Ed’s never trashed over the decades. The lucky buyer might’ve come away with Fancy Panties or Men’s Mesh Tops, a sign in the shape of a Hallowe’en pumpkin that reads WIGS $6.99, lovingly handpainted price boards for tinned sardines, coconut milk, hair grease or pomades – even Justin Bieber-photosilkscreened pyjamas. Along with Doug Kerr, the left-handed Reuben writes/paints in something like a serif font (and sans serif), to spell out Ed’s commercial message; and the tempera paint palette is strong and basic: blue, red, yellow, black.
So why would people line up to buy ephemeral signboards for 5 to 40 dollars? Is it nostalgia for the handmade? Or the curvilinear ease of Reuben’s brushstroke? No. It’s because Honest Ed Is For The Birds: Cheap Cheap Cheap!