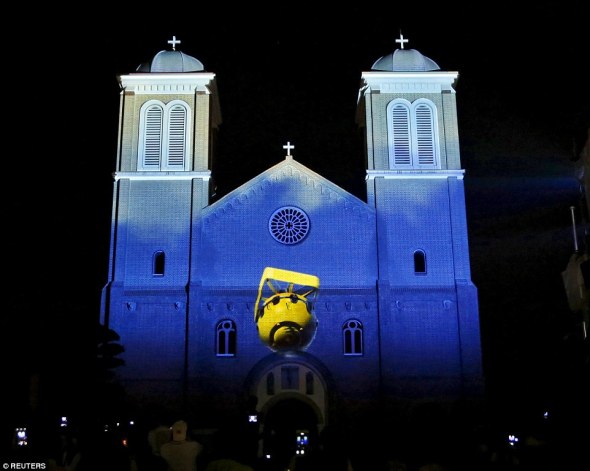 Nagasaki Japan_August 8th 2015_eve of the 70th anniversary of the Atom Bomb Fat Man dropped on the city killing 70,000 people

The U.S.A. dropped atomic bombs on the Japanese cities of Hiroshima and Nagasaki on August 6th and August 9th, 1945. This was the final stage of the Second World War, taking place not in Europe but in Asia and the Pacific. The two August 1945 bombings killed approximately 129,000 people – the largest “single-day” killings in the entire history of human war; and they remain until the present day the only use of nuclear weapons for warfare. Tens of thousands died of radiation sickness in the months that followed – and the majority of the dead were civilians. On August 15th, Japan announced its surrender to the Allies, and in early September of 1945 Japan signed an international document/treaty, bringing WWII to an end.

Kurihara Sadako (a Hiroshima Bomb survivor)
Let Us Be Midwives!
(translation from the Japanese by Michael R. Burch)
.
Midnight . . .
the basement of a shattered building . . .
atomic bomb survivors sniveling in the darkness . . .
not a single candle between them . . .
the odour of blood . . .
the stench of death . . .
the sickly-sweet smell of decaying humanity . . .
the groans . . .
the moans . . .
Out of all that, suddenly, miraculously, a voice:
“The baby’s coming!”
In the hellish basement, unexpectedly,
a young mother had gone into labour.
In the dark, lacking a single match, what to do?
Scrambling to her side,
forgetting their own suffering . . .
. . .
Kurihara Sadako
War Close Up
(translated from the Japanese by Michael R. Burch)
.
Stirring bugles! Rousing martial music!
The announcer reporting “victory”
like some messenger from on high,
fanning, fanning the fervoured flames of battle!
.
Masterful state magicians materializing
in a wizardly procession,
spreading cleverly poisoned words
to bewilder reason!
Artistic expression abracadabra’d into state-sponsored magic!

The sound of boots, guns, bombs, cannons
as our army advances, advances, advances toward the enemy!
The thunder of our invincible tanks advancing! Alleluia!
The sudden, sweet gurgles of drowning enemy ships!
.
The radio broadcasts the sounds of battle:
A war hymn resounding to the skies,
sung by courageous men and women
who worship this cruel idol, War.
.
Oh, so powerful the merest whiff
addles even the most independent spirit—
the opium of patriotism!
the religion of race!
.
While on scenic islands
scattered like stepping stones across the globe,
and on farflung continents,
driven by boundless avarice,
the landlords rage and rave again,
instilling hatred in indigenous populations
then prodding, driving them into battle.
Full of high-sounding pretexts
inevitably adapted to expediency
they raise indisputable banners—
God is on our side!
Righteous war!
Holy war!
.
“Right” becomes the password of thieves.
They square their shoulders:
“To secure world peace,
annihilate
the evil opponent!”
.
They bark commands:
“For ten years, a hundred years,
fight to the last man, the last woman!”
The master magicians’ martial music
resounds magisterially;
fanatic bull-mad patriots
roar and run amok;
completely bewitched, the people carol in unison:
“O, let me die by the side of my sweet Sovereign!”
. . .
Takashi “Thomas” Tanemori
The Blade of Grass in a Dreamless Field
.
Only a few knew it existed;
No one knew its power;
The world would never be the same again,
Changing irrevocably and forever.
The six-hundred-year history of Hiroshima
Disappeared in the ashes,
On this Judgment Day, on this Morning!

(i)
Blameless souls forever vanish
on this morning, this judgment day.
Our silent cries, to heaven we appeal,
scattered like the ash of withered leaves.
Our ebbing souls
cling to that lonely sky;
we try in vain to escape this sea of flame.
Oh, Hiroshima, once my haven,
why has your life been sacrificed?

(ii)
The abounding sadness within my heart . . .
drowning my loneliness in tears of self-pity.
Four abandoned children;
wishing to feel our mother’s love,
just once more;
if only in our dreams.
The heat of yet another long night lingers.
Oh, Hiroshima, once my home,
my tears run dry waiting for the breaking dawn.

(iii)
My soul is torn—this rage inside,
an orphan of war;
why does this make me feel guilty?
Why do my neighbours turn away
or close their ears when I speak?
Bitterness poisons this innocent child,
I madly waste away.
Oh, Hiroshima, once my cradle,
I am waiting to die.

(iv)
Gathering remnants of my courage,
I stand alone in this notorious America, land of the enemy.
An outcast with slanted eyes,
I fall before the indifference of strangers;
sightlessly, they trample upon my dignity.
This life of anguish seems to be my destiny.
Praying for death, I endure time.
Oh, Hiroshima, once my comfort,
I am lost in dreams of revenge.

(v)
Budding leaves renew this tired place, this tired soul;
gently the rain is embraced—your love,
comforting this savaged heart.
A blade of grass emerges from the ashes,
and my heart becomes a light,
connecting me to heaven.
Living for one another, this is my path!
Oh Hiroshima, forever my love,
may my life become a bridge from you and others.

(vi)
At the dawn of the 21st century,
we honour this passage through darkness.
We must have the courage to enter
the void again . . . and again,
emerging with the gift of new life.
Healing only comes through learning to forgive
and making peace with our past.
Only then, will the wind whisper:
“Hibakusha, you have not lived in vain!”

Sadako Kurihara was present on August 6th, 1945 ,when the Atom Bomb was dropped on Hiroshima. It was at that moment that her life was transformed from being a shopkeeper to becoming one of Japan’s most controversial poets. Her first major collection of poems, Black Eggs, published in 1946, was censored during the American Occupation because of her boldly addressing the horrors of the aftermath of the Bomb. The full volume of Black Eggs was not published until 1986. Over the years Kurihara has taken a stand on Japan’s aggressive rule in its Chinese occupation, the mistreatment of Koreans in Japan, plus the need for a world-wide ban on nuclear weapons. She was born in 1913 and died in 2005.
. . .

Takashi “Thomas” Tanemori (born 1938) is a “hibakusha“, and an Atomic Bomb survivor. After the bombing, he went from being the treasured Number One Son to being an Oyanashigo or “street urchin”. As he tried to survive after the loss of his parents, he became a “rat”, searching waste sites and garbage cans for food, just to stay alive in the rubble of post-war Japan. He fought constantly against a traditional society that showed no mercy to a “fatherless” child, and was ostracized by his fellow Japanese. Takashi’s life has been controlled by the emotion of Revenge, and he has lashed out at people for their icy unwillingness to help him. He emigrated to the United States in 1956, and, though he initially experienced prejudice and rejection, he has journeyed his way toward a vision of Hope.
. . .

Michael Ray Burch (born 1958) is an American poet and peace activist who lives in Nashville, Tennessee. He has translated the poems of Basho, Brecht, Allama Iqbal, Ono no Komachi, Miklós Radnóti, and Rainer Maria Rilke, among others.
. . . . .