← Nicomedes Santa Cruz: “Congo”
“When I strolled along the cracked streets”: excerpts from Young Voices 2014: The Magazine of Teen Writing and Visual Art in Toronto → 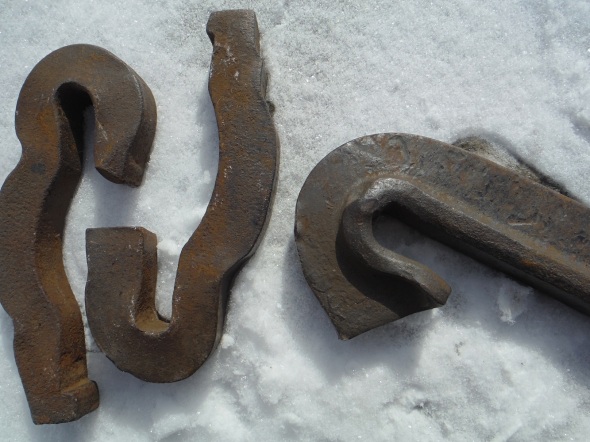 Railway clips from the Grand Trunk Railroad / Canadian National Railroad line between Quebec and Ontario, the tracks that brought Donald Willard Moore from Montreal to Toronto…

Excerpt from the Negro Citizenship Association’s 1954 brief to Canada’s Ministry of Citizenship and Immigration:
The Immigration Act since 1923 seems to have been purposely written and revised to deny equal immigration status to those areas of the Commonwealth where coloured peoples constitute a large part of the population. This is done by creating a rigid definition of British Subject: ‘British subjects by birth or by naturalization in the United Kingdom, Australia, New Zealand or the Union of South Africa and citizens of Ireland.’ This definition excludes from the category of ‘British subject’ those who are in all other senses British subjects, but who come from such areas as the British West Indies, Bermuda, British Guiana, Ceylon, India, Pakistan, Africa, etc…Our delegation claims this definition of British subject is discriminatory and dangerous.

Donald Willard Moore (1891-1994) was a community leader and civil-rights activist who fought to change Canada’s exclusionary immigration laws.
Moore was born at Lodge Hill in St. Michael’s Parish, Barbados, in November of 1891. His parents were Charles Alexander Moore, a cabinetmaker and member of the Barbados Harbour Police Force, and Ruth Elizabeth Moore.
.
At the age of 21, Moore left his family and emigrated to the U.S.A., but soon left New York City for Montreal. He found work with the Canadian Pacific Railway as a sleeping car porter and his job brought him to Toronto. Moore earned enough to enrol in The Dominion Business College at 357 College Street, where he completed the courses necessary to allow him to register in the dentistry programme at Dalhousie University in Halifax in 1918.
.
A lengthy bout of tuberculosis brought an end to Moore’s formal education and his hopes of becoming a dentist. In need of money, he took a job as a tailor, a trade he had learned in Barbados. In 1920, Moore began working at Occidental Cleaners and Dyers, located at 318 Spadina Avenue between St. Patrick Street (now Dundas Street West) and St. Andrew Street. Eventually he was able to purchase the business.
Moore’s store was a gathering place for the West Indian community. It was there that the Toronto branch of Marcus Garvey’s Universal Negro Improvement Association was established, as well as the West Indian and Progressive Association and the West Indian Trading Association. Moore would continue to operate his business in various locations until his retirement in 1975.
.
In 1951, Moore founded what came to be known as the Negro Citizenship Association, a social and humanitarian organization with the motto “Dedicated to the promotion of a better Canadian citizen.” The association’s aim was to challenge the systematic denial of black West Indians seeking legal entry into Canada, and to bring an end to the incarceration of individuals who were awaiting either deportation or decisions on deportation order appeals.
.
In April of 1954 Moore led a delegation to Ottawa, which included 34 representatives from the Negro Citizenship Association as well as unions, labour councils, and community organizations. They presented a brief to Canada’s Minister of Citizenship and Immigration, Walter E. Harris.
The brief drew public attention to Canada’s discriminatory immigration laws, which were denying equal immigration status to non-white British subjects, described the impact of those laws, and made specific recommendations for change.

1954 photograph of Negro Citizenship Association Reception Tea_Donald Moore is in the back row third in from the right.

This landmark brief – the fact-gathering and presentation of which were spearheaded by Donald Moore – led to a subsequent relaxation of immigration laws, and opened the door for West Indian nurses and domestics to find employment in Canada. By 1955, Moore’s work with the governments of Jamaica, Barbados, and Canada enabled domestics to gain permanent residency after one year of work.
.
In 1956, Moore and two other members of the Negro Citizenship Association purchased a 12-room house on Cecil Street and converted it into a recreation centre for the West Indian community called Donavalon Centre.
In addition to serving as the home of the United Negro Improvement Association and the Toronto Negro Citizenship Association, the Donavalon Centre offered a range of activities and services, including dances, teas, Sunday programmes, insurance for its members, and the publication of a quarterly newsletter.
.
Moore retired from business and public life in 1975, and in his later years became an avid gardener. An award-winning member of the North York Horticultural Society, he cultivated a beautifully landscaped garden and lush greenhouse at his home on Drewry Avenue, a house he built himself not long after purchasing the undeveloped two-acre lot back in 1942.

Moore was the recipient of several awards for his major contributions to the West Indian community and thereby to Canadian society.  They included:  the City of Toronto Award of Merit (1982), the Ontario Bicentennial Medal (1984), the Harry Jerome Award of Merit (1984), the Barbados Service Medal (1986), the Ontario Ministry of Citizenship award (1987), the Order of Ontario (1988), and the Order of Canada (1990).
In August 1994, Donald Moore died in his sleep at the age of 102. He is buried at Sanctuary Park Cemetery in Etobicoke. He had been married to his wife Kay for close to 30 years, and had one son Desmond, and three stepchildren: Karlene, Lawson, and Betty.
. . .
Biographical information about Donald Willard Moore was obtained from the City of Toronto Archives – Many Thanks!
. . . . .