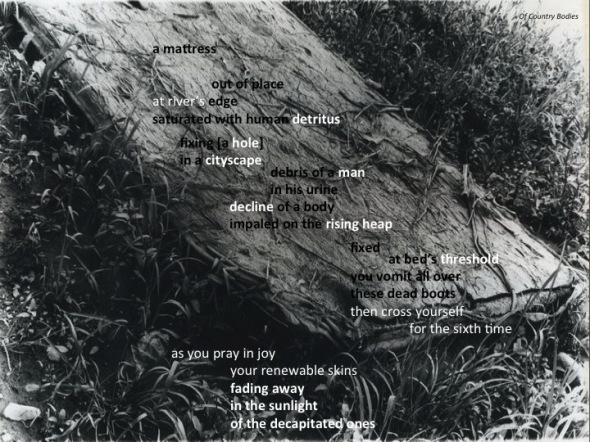 Jassinthe writes of this poem:

“I’m speaking here of two homeless drug-addicts.  Having no shelter other than the banks of an urban river, there they sleep where solitude isolates them, pushes them toward a more physical closeness. Drug-taking and love-making help them forget the cold, the loneliness – and their Being.”

Murielle Jassinthe was born in Québec in 1982 – of Haitian parentage.

Currently she’s pursuing a Masters in African and Francophone Literatures at Laval University where she works also as a research assistant.  Two years ago, Éditions Bruno Doucey published “Land of Women” – an anthology of Haitian women poets spanning a century-and-a-half. Jassinthe’s poetry was included – one of the youngest voices.  Last year, at Laval University’s Lantiss, she worked both as actress and production assistant on a play by Haitian playwright Guy Régis, Jr., entitled “La mort de soi dans sa longue robe de Mariée”.  Also in 2011 Murielle received a writer’s grant from Première Ovation, and was mentored by poet Alix Renaud for the creation of her collection of poems with photographs, “Trouble Optik” – from which comes the poem we feature here.

Poem translation from French into English: